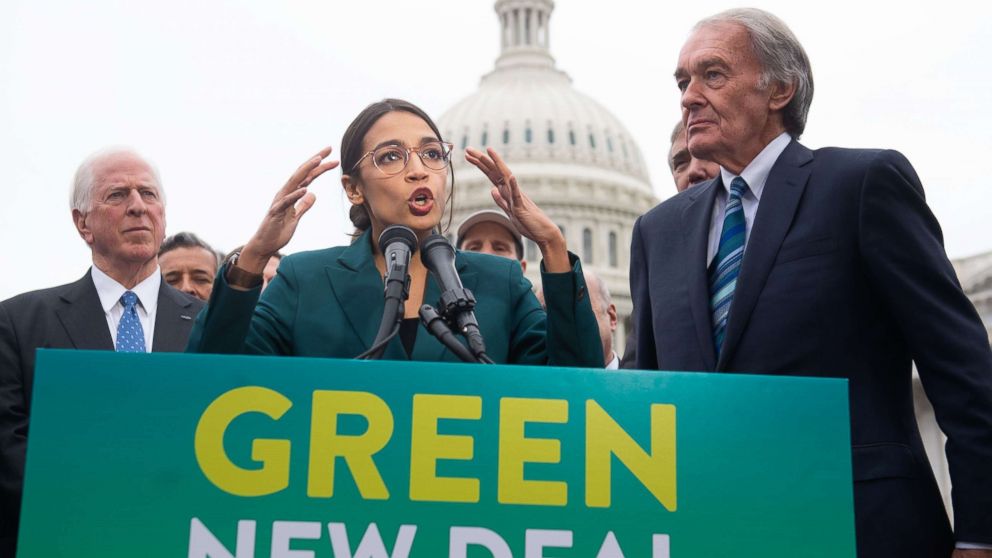 The Senate on Tuesday voted down a procedural measure to advance the Green New Deal, a wide-reaching proposal that would address climate change.

Forty-three Democrats voted "present" in protest of the measure, even though many of them have said that they support the framework of the resolution. Democratic Sens. Joe Manchin of West Virginia, Angus King of Maine, Kyrsten Sinema of Arizona and Doug Jones of Alabama voted no with the Republicans.

Ahead of the vote, Senate Democrats blasted the vote as a “sham.” Democratic Party leaders said they believe Republicans used the vote as a political ploy to divide Democrats on a high-profile progressive idea. Instead, Democrats want members of the Republican leadership to schedule hearings rather than bringing the legislation straight to the floor for a vote.

Senate Majority Leader Mitch McConnell denied earlier on Tuesday that the vote was a sham and, when asked by a reporter if he believed climate change to be real and caused by humans, he replied, “I do.”

He further challenged Democrats, “If you believe the Green New Deal is the prescription for America, why would you not want to vote on it?”

On the floor, just before the vote, he added, “I have to say, it’s remarkable enough to see a major political party coalesce around a proposal to forcibly remake the entire country according to what’s fashionable in Brooklyn and San Francisco,” McConnell said. “But it is even more stunning to see my colleagues so angry and upset at the opportunity to back up their new philosophy with their votes.”

McConnell’s decision to hold a vote on the deal suffered a blistering rebuke from Rep. Alexandria Ocasio-Cortez, D-N.Y., a co-sponsor of the legislation.

“The Senate vote is a perfect example of that kind of superficial approach to government,” Ocasio-Cortez said on Tuesday. “What McConnell’s doing is that he’s trying to rush this bill to the floor without a hearing, without any markups, without working through committee -- because he doesn’t want to save our planet. Because he thinks we can drink oil in 30 years when all our water is poisoned.”

McConnell has called the proposal a “far-left wish list” originating with the “most radical, farthest-left members of the new House Democratic majority.”

In a series of speeches, Republicans blasted the Green New Deal as “wildly unrealistic” and a “radical environmental policy.”

The wide-reaching proposal calls not just for a massive overhaul of the nation's energy sector over the next 10 years, but also investments in the country's education, infrastructure and health care systems and a redesign of the entire U.S. economy.

Progressive Democrats and climate activists say the Green New Deal is the only plan proposed, so far, that is ambitious enough to have an impact to prevent the worst case scenario of global warming. Supporters frequently cite a recent United Nations climate report that warned some effects on the environment could become irreversible in the next two decades.

Ultimately, the Green New Deal focuses on the alarming findings of recent climate change reports -- increasing numbers of natural disasters like wildfires, droughts and floods which are reportedly the result of rising levels of greenhouse gases; mass migration expected from affected regions; more than $500 billion in lost output by 2100 -- and suggests drastic solutions, such as bringing greenhouse gas emissions down to net-zero.

The resolution also calls for 100 percent of U.S. energy demand to be "clean, renewable and zero-emission" and for a redesign of transportation systems nationwide in order to eliminate pollution and greenhouse gas emissions from the transportation sector.

“It’s time to move past ‘gotcha’ politics and on to a real debate on the bold action that is necessary to save our communities. Unfortunately, we can’t have a good-faith policy debate while one party remains a wholly owned subsidiary of the fossil fuel industry,” Sen. Jeff Merkley, D-Oregon, who also co-sponsored the resolution, said in a statement Tuesday. “We need bipartisan acknowledgment that this crisis is real; that it presents an existential threat to our nation; and that the only serious solution is to make the bold pivot from polluting fossil fuels to clean and renewable energy in the next dozen years.”