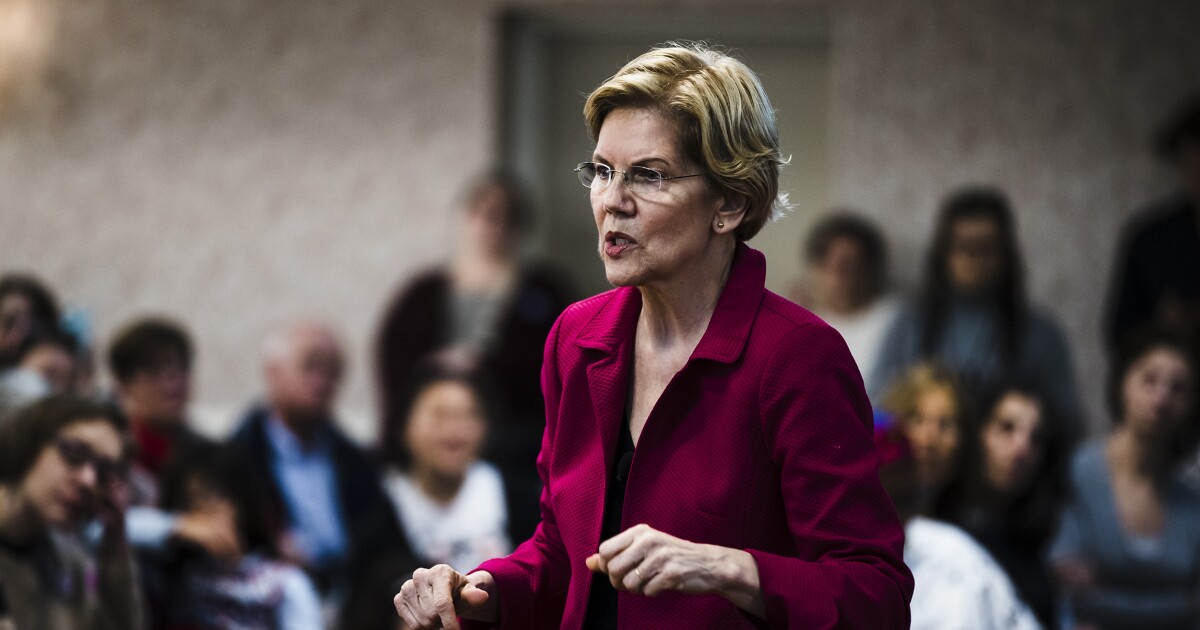 Elizabeth Warren released a long-awaited "Medicare for all" funding plan after coming under pressure by Democratic rivals about how to fund such a system without middle-class tax increases.

The plan, published Friday, would raise $20 trillion in taxes on employers, financial firms, giant corporations, and the top 1% of earners, including raising $2.3 trillion by cracking down on tax evasion. The Warren campaign estimates that, once it redirects state spending to the federal government, it will spend $26 trillion to get "Medicare for all," an estimate that falls $8 trillion short of what many outside analysts have projected.

Warren says she can get there through savings over time with lower administrative costs and paying providers less, even though other estimates that take these changes into account disagree with that conclusion.

“We don’t need to raise taxes on the middle class by one penny to finance Medicare for All,” Warren, a senator from Massachusetts, said in a Medium post detailing her payment plan. Instead, she estimates that because people will no longer be contributing to premiums in their paychecks, they'll be taking home more money and that would in turn help raise $1.4 trillion.

The plan estimates employers will send $8.8 trillion over 10 years to the federal government as an "Employer Medicare Contribution," which the campaign says would be the same as what employers pay for their workers to get health insurance now. It also includes cuts to military spending and savings through immigration reform, both of which will be difficult to get through Congress. The federal government would take on $6 trillion in spending that states already are expected to pay out under current law.

The 2020 Democratic presidential hopeful has been under pressure from Democratic rivals to release details about how she would fund the Medicare for All Act from rival Bernie Sanders that she supports. The plan, according to the left-of-center Urban Institute, would increase federal spending by $34 trillion over a decade and result in $7 trillion more total national health spending over a decade than the current healthcare system.

Warren's campaign writes that overall healthcare spending would rise to $52 trillion over a decade without any changes and predicts that "Medicare for all" will cost the United States less than that. That claim, however, clashes with the Urban Institute's conclusion that the cost of providing more healthcare to more people is higher than the amount of savings to the system from reducing how much medical providers get reimbursed or by cutting administrative costs. That analysis predicts "Medicare for all" would result in $59 trillion total national health spending over a decade.

There might be some differences that account for a little bit of the estimate from the Warren campaign. For instance, the Warren plan would pay hospitals 110% of Medicare rates, while the Urban Institute estimates it would pay 115%. The Medicare for All Act Sanders introduced does not set rates but allows the Department of Health and Human Services to do so.

The plan was greeted by backlash from the industry, which says it will face major closures under "Medicare for all" and that patients will lose access to care. Hospitals, which are among the largest employers in many towns, are a formidable force in politics, and tap into higher rates paid by private health insurance to make up the difference in what Medicare pays.

According to a RAND study from 2019, the payments they get from private insurers are often more than twice as high as Medicare rates, which is significantly higher than the 110% Warren is promising. Another study from the conservative Manhattan Institute estimates private health insurers pay between 140%-160% of Medicare rates. Roughly 180 million people in America are covered by private plans.

"Hospitals are already paid far less than the cost of caring for Medicare patients — and patients on an underfunded system would strain hospitals even more — and could threaten access to care and hospitals’ survival," said Tom Nickels, executive vice president of the American Hospital Association.

Still, hospitals would be recouping more from Medicaid patients, who comprise 74 million people.

The plan would be more generous than the current Medicare system, covering services from mental health to prescription drugs and oral health, all without co-pays. It would force everyone living in the U.S., regardless of immigration status, into a government plan and abolish private health insurance.

Other ways Warren would help pay for it would be make changes to the wealth tax on billionaires she previously pitched, by doubling it from a 3% tax on wealth over $1 billion to a 6% tax. She predicts that will raise an additional $1 trillion over 10 years.

As part of her post, Warren teased another plan she'll be releasing in the coming weeks, about how to transition to "Medicare for all." The Sanders bill calls for a four-year transition, while the House companion bill would move everyone onto a government plan in two years. Obamacare, which covered 20 million people, began enrolling people in coverage through Medicare and the marketplaces five years after it passed.