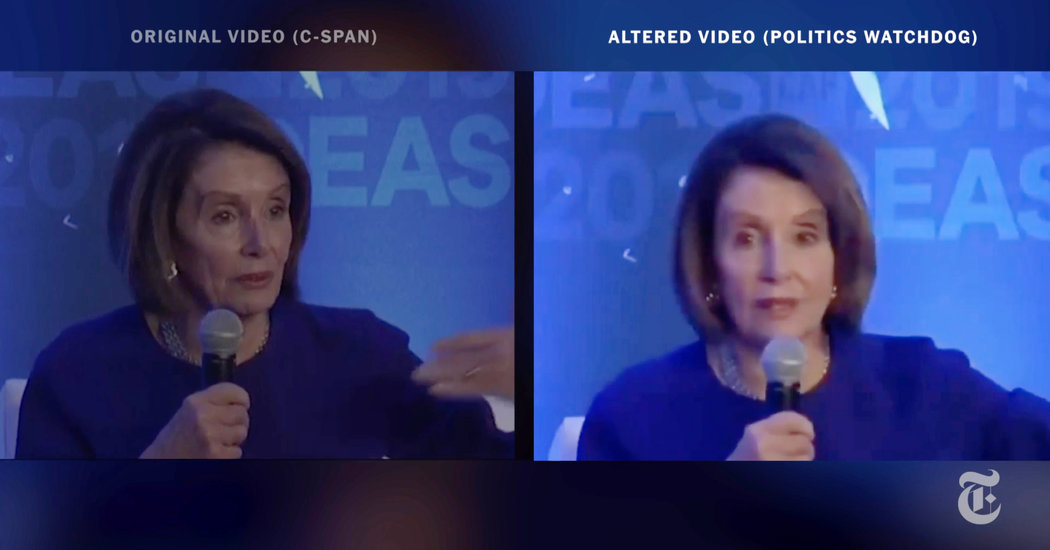 Manipulated videos of Speaker Nancy Pelosi that made it seem as if she were stumbling over and slurring her words continued to spread across social media on Friday, fueled by President Trump’s feud with the Democratic leader.

One of the videos, which showed Ms. Pelosi speaking at a conference this week, appeared to be slowed down to make her speech sound continually garbled.

The video has been viewed millions of times on Facebook and was amplified by the president’s personal lawyer, Rudolph W. Giuliani, who shared the video Thursday night on Twitter. “What is wrong with Nancy Pelosi?” Mr. Giuliani said in a tweet that has since been deleted. “Her speech pattern is bizarre.”

Mr. Trump himself tweeted a separate video of Ms. Pelosi on Thursday night, an edited clip from Fox Business that spliced together moments from a 20-minute news conference and emphasized points where she had stumbled on her words. “PELOSI STAMMERS THROUGH NEWS CONFERENCE,” the president tweeted.

By Friday, the social media giants, already under pressure to fight online disinformation, were forced to respond.

Addressing the distorted video that made Ms. Pelosi’s speech sound slurred, YouTube said the video violated its standards and had been removed. Facebook said that a third-party fact checker had rated the video “false,” but posts remained on the site and the company said it was trying to limit how widely the video was shared. That video continued to be shared and viewed on Twitter, but the company declined to comment.

The videos surfaced online amid a particularly intense and public feud between Mr. Trump and Ms. Pelosi. Each questioned the other’s temperament and mental fitness in an exchange of personal insults on Thursday, as Ms. Pelosi works to stave off impeachment proceedings that she believes could harm her party and as Mr. Trump continues to defy Democratic efforts to subpoena documents and summon witnesses in the wake of the release of the special counsel’s report last month.

But the videos also raised broader concerns about the roles of digital manipulation and disinformation in politics, particularly in the lead-up to the 2020 election.

Tech giants have been grappling with how to combat disinformation, after Russian interference during the 2016 presidential election became a template for spreading false information online. And recent episodes have underscored how videos and other information can make their way from the corners of the internet to the mantel of national politics.

Mr. Trump has previously used doctored, if obviously cartoonish, videos for political purposes, including ones targeting former Vice President Joseph R. Biden Jr., a Democratic candidate for president, and CNN, the cable news network. In another case, his administration relied on a misleadingly edited video from a contributor to the conspiracy site Infowars to help justify removing the credentials of CNN’s chief White House correspondent.

In another instance, Democratic tech experts mimicked Russian tactics to help Senator Doug Jones of Alabama edge out his Republican opponent, Roy S. Moore, including creating a Facebook page where they posed as conservatives to divide Republicans and endorse a write-in candidate to draw votes away from Mr. Moore.

The origin of the footage that changed Ms. Pelosi’s speech was not clear. In a video posted by C-SPAN, she can be seen speaking at normal speed at a conference for the Center for American Progress.

Siwei Lyu, a professor of computer science at the State University of New York at Albany, said the video boosted low frequencies in the audio, while preserving Ms. Pelosi’s words and appearance, making it especially effective at creating a false impression.

“It’s very subtle,” he said. “I think that is actually one of the most dangerous parts of disinformation and fake media.”

The edited version was shared widely on Facebook and elsewhere, prompting many to question whether Ms. Pelosi had been drinking or had been otherwise under the influence.

An aide to Ms. Pelosi described the attacks as sexist and said the speaker does not drink. Her supporters also raised concerns about the timing of the president’s own tweet sharing the spliced Fox Business video, which came as the video distorting her speech was making the rounds online.

In a statement on Friday night, Fox Business emphasized that the clips it used of Ms. Pelosi did not slow down her speech.

On Friday, Mr. Giuliani said that he did not know that the distorted video that he shared had been altered when he shared it on Twitter. “I didn’t know it was doctored,” he said. “I had no reason to believe it at the time. It looked like enough of an extension of the way she communicates anyway.”

“It did seem a little exaggerated and I think I tweeted, ‘What’s wrong?’” he added. “But to overreact is a little hypocritical given she is the one who was making very, very direct comments about the competence of the president of the United States of America, which I don’t think any good American should do.”

Mr. Giuliani said that he took the tweet down after someone texted him calling the video into question. He said he had not seen the original footage.

“Where do you go to check that it’s inaccurate?” he said. “How could I have figured out that it was inaccurate?”

Dr. Lyu, who has studied deepfakes, a kind of ultrarealistic fake video made with artificial intelligence software, said that many false videos can be detected if people slow down, watch again and think critically.

“There is no way back; the Pandora’s box is opened,” he said. But he added: “We are all part of the ecosystem, consuming and also generating information, so we must do our part of the job to make the ecosystem healthy.”

The back-and-forth between Mr. Trump and Ms. Pelosi ensued on Thursday as she suggested that he was too unstable to govern. The president’s theatrical scrapping of Wednesday’s infrastructure meeting at the White House raised questions about his temperament and behavior, she said.

Mr. Trump had “another temper tantrum,” she told reporters at her weekly news conference at the Capitol. “Again, I pray for the president of the United States. I wish that his family or his administration or his staff would have an intervention for the good of the country.”

The president gave her a derogatory nickname, calling her “Crazy Nancy.”

“She’s a mess. She’s lost it,” the president said during an event to announce $16 billion in aid to farmers, in part to compensate for his tariffs policy on China. That event transformed into a monologue and a question-and-answer session with reporters, which included a revival of an old self-assessment that Mr. Trump is an “extremely stable genius.”

Ms. Pelosi quickly shot back on Twitter, saying, “When the ‘extremely stable genius’ starts acting more presidential, I’ll be happy to work with him on infrastructure, trade and other issues.”

In his own tweets on Friday, Mr. Giuliani said he would not apologize for sharing the video.

“Nancy Pelosi wants an apology for a caricature exaggerating her already halting speech pattern,” he wrote, before recalling her comment that Mr. Trump needed an intervention. “First she should withdraw her charge which hurts our entire nation.”