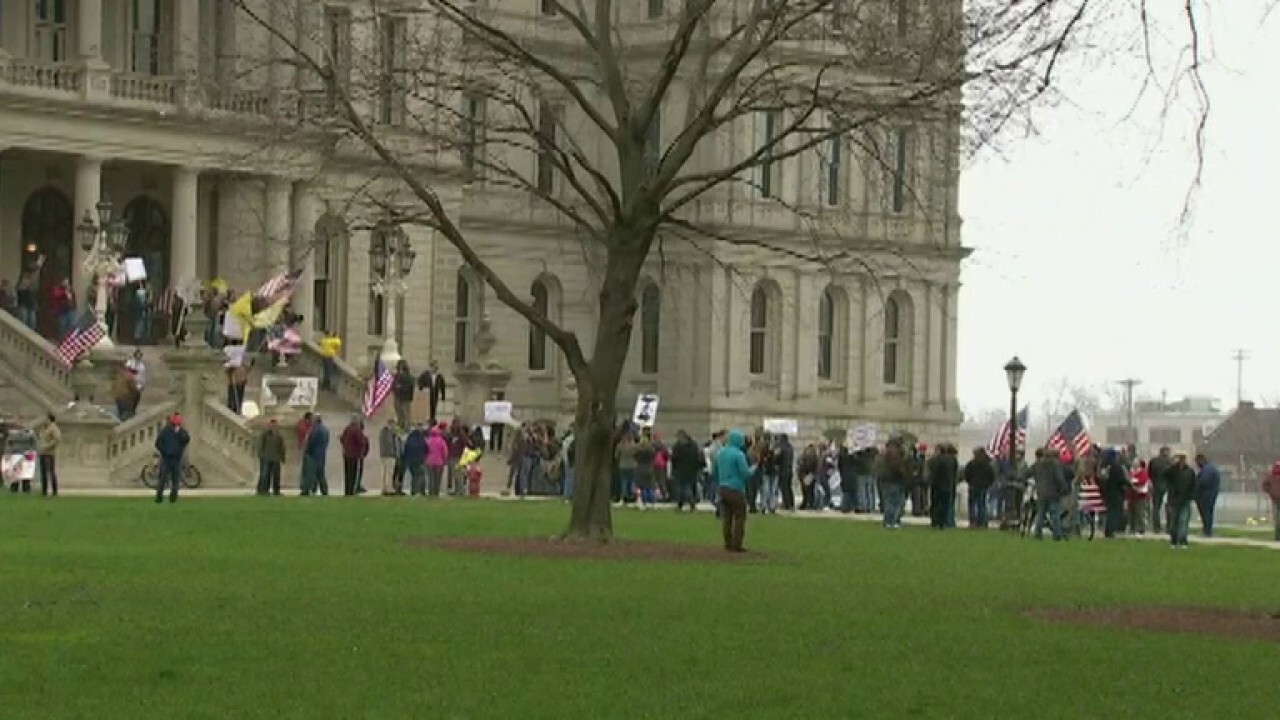 A growing wave of rallies are taking place across the country as protesters demand that state governments lift their orders closing businesses and public places as soon as possible, even as officials urge caution to prevent a resurgence of coronavirus.

These Americans say they are suffering because of the economic shutdowns nationwide to reduce the spread of the coronavirus and are antsy to resume working and going out in public as usual.

The movement, which started with demonstrations in North Carolina and Michigan, has now spread to New York, Ohio, Virginia and Kentucky with more protests slated for the coming days even as federal and state officials are warning that rolling back virus mitigations efforts too soon will lead to even more coronavirus cases and set back the nation's response to the pandemic.

"Minnesota citizens now is the time to demand Governor Walz and our state legislators end this lock down!" the description of a Facebook event titled "Liberate Minnesota" scheduled for noon on Friday reads. "Minnesota's economy must be reopened for business or destroying the livelihoods of hundreds of thousands of Minnesota citizens and their families may result if we don't act quickly!"

The event has 577 people saying they will go and 2,600 indicating they are interested in attending as of Friday morning.

It's unclear how many people will actually be there as the Virginia event saw a much smaller turnout than organizers thought.

A press release shared by one organizer of the Pennsylvania rally states that protesters will ask Pennsylvania Democratic Gov. Tom Wolf to not extend his state's stay-at-home order past May 1. Protesters will adhere to social distancing by staying in their cars.

"We will have endured nearly 7 weeks of lock down when May 1st arrives and the end of these restrictions has remained indefinite," the organizers say in the release. "Business owners are being forced to layoff employees while the unemployment system is failing those laid off and the economy free falls. Pennsylvanians deserve more than just endless extensions. It is not sustainable to continue the shut down as the economic and societal consequences may be irreversible."

Protests will continue Friday, with the Idaho Statesman reporting that activist groups in Idaho plan to gather in Boise to protest that state's stay-at-home order.

There are also rallies planned for Maryland on Saturday, Nevada on Saturday, Colorado on Sunday, and Wisconsin next Friday -- with rallies for New Hampshire and upstate New York in the works without a planned date yet.

But as rallygoers concern themselves with the economic and social effects -- as well as the limits on their personal freedom -- of mandating that businesses shut down and people stay in their homes, politicians, including President Trump, are warning that the process of lifting restrictions meant to slow the spread of the virus must be done gradually.

But, he added: "We are not opening all at once, but one careful step at a time."

LIBERATE VIRGINIA, and save your great 2nd Amendment. It is under siege!

The three states Trump tweeted about -- Virginia, Michigan and Minnesota -- also all have Democratic governors.

Texas Republican Gov. Greg Abbott is expected to announce his plan get Texas back to business as usual on Friday, but in previewing the plan earlier this week he cautioned that the plan will not be "a rush the gates, everybody is able to suddenly reopen all at once. We have to understand that we must reopen in a way in which we are able to stimulate the economy while at the very same time ensuring that we contain the spread of COVID-19."

New Mexico Democratic Gov. Michelle Lujan Grisham has been even more cautious than Trump and Abbott.

No one wants to reopen our state more than I do. But we’re in an extraordinary situation, facing a deadly virus that's spread worldwide.

We can’t be guided by gut feelings – we have to listen to scientists and public health experts. We have to stay home.https://www.abqjournal.com/1443401/gov-health-vs-economy-a-false-choice.html …

OPINION | Right now, America faces greater economic pain than at any time since the Great Depression. Tens of ...

She wrote in an op-ed this week for the Albuquerque Journal that "[n]o one is more eager than I am to lift our stay-at-home orders and declare New Mexico open for business," but said "as public health experts remind us, we are not anywhere close to that point."

State, local and federal officials have emphasized that social distancing protocols and stay-at-home orders are working, keeping hospitals, outside of a few hotspots, under capacity and in many cases flattening the curve of the disease's spread. But many have also warned that it will be months, if not more, before the U.S. can fully get back to the normal it knew before the pandemic.

An internal government document first obtained by the New York Times indicated that the pandemic "will last 18 months or longer and could include multiple waves of illness," and Dr. Anthony Fauci, the face of the White House's coronavirus task force, has warned that rolling back social distancing protocols too early could result in a dangerous resurgence of the virus.

But Fauci has also indicated that with proper precautions, some activities could begin again.

He said on Snapchat's “Good Luck America” this week that July 4 might be a reasonable date for Major League Baseball to begin its currently-postponed season -- but in empty stadiums without fans. Fauci has also previously indicated that kids could be back in school by the fall thanks to increased herd immunity and improved testing capabilities.

But there are others who are less optimistic.

Joe Biden campaign adviser and Affordable Care Act (ACA) architect Dr. Zeke Emanuel said on MSNBC earlier this month that the current lockdown measures could last up to a year-and-a-half.

"I know that's dreadful news to hear," the Biden adviser said. "How are people supposed to find work if this goes on in some form for a year and a half? Is all that economic pain worth trying to stop COVID-19? The truth is we have no choice. ... We cannot return to normal until there's a vaccine. Conferences, concerts, sporting events, religious services, dinner in a restaurant, none of that will resume until we find a vaccine, a treatment, or a cure."

Police officers in Raleigh declared protest a non essential activity. We no longer have a first amendment right of peaceable assembly. This is why we have a second amendment. #ReopenNC

That warning from Emanuel is unlikely to convince many protesters who see the restrictions imposed by governors as unreasonable -- or even unconstitutional.

"Police officers in Ralegh declared protest a non essential activity," Townhall columnist Mike Adams tweeted about the North Carolina protest Tuesday. "We no longer have a first amendment right of peaceable assembly. This is why we have a second amendment."