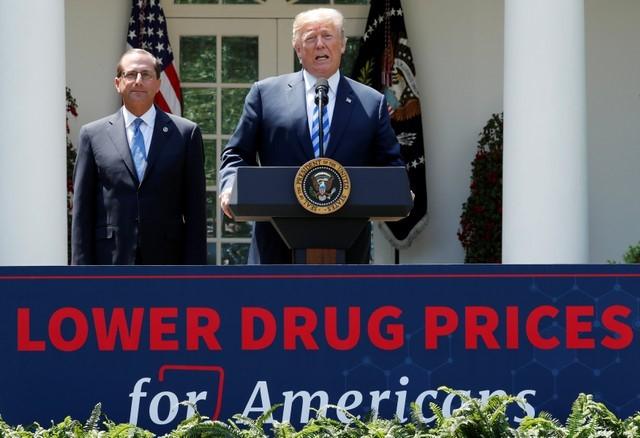 Trump made the remarks at the White House Rose Garden in a speech to introduce what he called “the most sweeping action in history” to lower drug prices. The effort comes as a growing number of Americans struggle with the cost of their medications, and cite healthcare concerns as a top priority for Washington ahead of congressional elections in November.

Trump said his administration would take aim at the “middlemen” in the drug industry who became “very, very rich,” an apparent reference to health insurers and pharmacy benefit managers (PBMs). He also said the pharmaceutical industry is making an “absolute fortune” at the expense of American taxpayers.

“Everyone involved in the broken system - the drugmakers, insurance companies, distributors, pharmacy benefit managers, and many others - contribute to the problem,” Trump said.

Trump campaigned on lowering prescription drug prices ahead of the 2016 presidential election, even accusing drugmakers of “getting away with murder.” Healthcare investors had braced for months for more direct attempts to regulate U.S. prices that would cut into industry profits.

But Trump has since abandoned ideas to lower drug costs he supported during the campaign, including allowing the government’s Medicare plan for older Americans to negotiate prices directly with drugmakers, and enabling U.S. consumers to import lower-cost medicines from other countries.

Critics said the policies pointed to the influence the pharmaceutical industry wields with the administration.

Shares of major drugmakers, insurers and PBMs rose after the speech. The S&P 500 healthcare index .SPXHC, a broad gauge of large healthcare stocks, closed up 1.5 percent, its biggest single-day percentage gain in a month.

As the speech was underway, the Department of Health and Human Services released what it called a blueprint titled “American Patients First” with details of its plan.

It said near-term actions would include giving commercial plans that administer Medicare Part D prescription drug benefits for seniors more power to negotiate prices with drugmakers. Federal health plans would also test ways to pay for drugs based on their effectiveness.

The U.S. Food and Drug Administration would evaluate requiring drugmakers to include the list prices they set on medicines in their advertising. Drugmakers argue that list prices do not reflect actual cost after discounts and rebates.

Some of the administration’s longer-term priorities include restricting use of rebates, creating incentives for drugmakers to lower list prices, and investigating tools to address foreign government practices that it said could be harming innovation and driving up U.S. prices.

“There’s not a big proposal here that is going to make a huge difference. There are a bunch of smaller technical changes,” said Sam Richardson, Associate Professor of Economics at Boston College.

Regarding forcing other countries to pay more for drugs, Richardson said: “We don’t really have the policy levers to get that to happen.”

Health and Human Services Secretary Alex Azar, a former pharmaceutical company executive, said many of the actions the government was considering would not require approval by Congress and could take place through executive action within months. He said it would take years to restructure the U.S. drug system.

Trump also blasted the pharmaceutical and insurance industries for spending hundreds of millions of dollars on lobbying to “protect the status quo.”

His remarks follow a renewed focus on the influence of the drugmaker lobby, which spends the most of any lobbying group in Washington.